Built in the 1840’s as a rest stop for travellers on the Geelong-Melbourne road, the Little River Bed and Breakfast has become an icon that is loved by the locals and enjoyed by it’s guests. This single story bluestone building is full of character with a balance of old and new to ensure your stay is a pleasurable one.

The site was originally known as the Bowling Green Hotel which was built after the Little River railway opened. This establishment burnt down in 1858. A second hotel was built on this site in the early 1860’s that was quite modest and was replaced with the building that stands today in the early 1870’s.

Tanya and Craig (current owners) spent copious hours researching and renovating to restore the residence to it’s former glory and add additional charm that reflects their personalities. Being fans of vintage Australiana items, they created the garden of nostalgia.

This heritage listed building has possible regional significance as one of the few mid-Victorian period hotels remaining on an historic site occupied by hotels from the 1850’s.

A link to popular culture 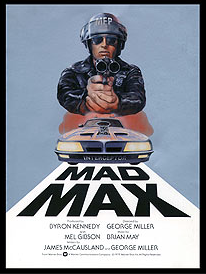 The Little River Bed and Breakfast become a part of local film history when a relatively unknown actor made a road movie that would make him a film icon. That film was Mad Max, directed by George Miller. It became a critical success. To celebrate all things Mad Max we take part in the Back 2 the Max reunion which was very well received.

Little River and areas surrounding have been featured in other productions for both the big screen and the small. Steven Spielberg and Tom Hanks made the HBO mini series,The Pacific. Nicolas Cage’s Ghost Rider and Geoffrey Rush’s The Eye of the Storm were both filmed at nearby Anakie.

The name Little River became famous during the 70’s due to a band of musicians that just happened to be driving through. They saw the road sign and named their band after the town. The Little River Band were a huge success in the music charts and made our little town a household name.

In 2007 this site was featured as a set for the Make Poverty History Campaign to show support for a charity we all believe in.

The community is important to us so we actively host and take part in local events.

Visit the gallery to view our history in images

You can find us right here